French provocateur Yves Klein—he of the paint-slathered models rolled across canvases—tried his hand at a new medium in 1961: the cocktail table. He made two prototypes, sprinkling pigments into wood tops, but never got around to installing the protective glass.

In 1963, after the artist’s death, at 34, his widow produced the patented acrylic tables now beloved by everyone from Stella Schnabel to Sting. Filled with radiant pigment—International Klein Blue or hot pink—or crumpled gold leaf, they are available through Artware Editions. (A new Table Bleue sells for $21,000.) Chalk it up to Klein exhibitions in the early 2000s or wild auction prices, but everyone wants one—and designers find that the tables work in every decor.

“It is the ultimate abstract art piece, and completely functional,” says photographer Inez van Lamsweerde, who bought one in 2007. But before you order, consider this: “Two men showed up in hazmat suits and built a tent around the living room in order to sift the blue pigment,” Van Lamsweerde says. Accessories designer Fiona Kotur, however, took a more hands-on approach: “I put the pigment in a plastic bin and ladled it into the table, gingerly, with a dustpan.” 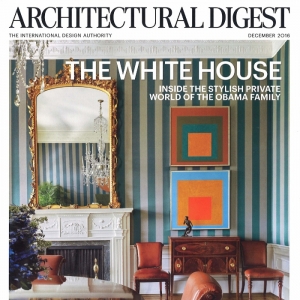